Get to know our 'Tri-City Gala' artists!

We here at VanCOCO are incredibly proud of the singers who are bringing our ‘Tri-City Gala’ to life!  Since they are all active on the international opera scene, and extremely busy, we were fortunate to manage to steal a few minutes from their very busy schedules to ask them a few questions about the concert programming, their voices and careers, a bit about their backgrounds, and some fun rapid fire questions too!  We were very surprised at some of the answers, so we hope you enjoy this as much as we did!

We have broken our conversation into several segments for your reading pleasure!  Check back often for more installments!!

Please visit www.vancoco.ca to purchase your tickets! Only 4 days left of our 'Special Holiday Pricing'!! 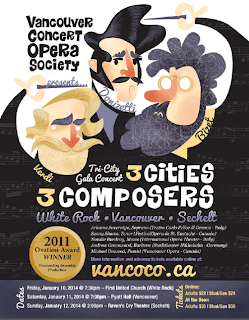 Are you from a musical family?

AG: Not really. I’m more from a family that likes music.

NB: Not directly, my father was an industrial psychologist, and my mother was an administrator before becoming a real estate agent. However, there are a number of visual artists in our family (photography, painting) and it is rumored that my great grandfather was a professional cantor in the Ukrainian church.

SS: Not really. My mom studied piano and accordion as a kid, but never really pursued it in a serious way. But, I'm from a very music-appreciative family. They love music of all kinds.

AS: Well, my grandfather (on my mother's side) used to sing in the choir and my dad has a nice voice, but other than that no one sings or plays an instrument... and I have a very, very large italian family!

How did you decide on opera?

AG: It decided on me.  Apparently my mom's grandfather said that l had a great singing voice. I started out singing in ensembles and choirs and loved to sing harmony, mostly A cappella.  I didn't start lessons until I was 23 and eventually found I had top notes which is good for opera. That was in my first year of college, where I was majoring in classical voice.  I always wanted to do oratorio and early music.  I fell in love with 15th century polyphonic music and also sang in a barbershop quartet!! Total gleek!!!!  I never sang in a rock band like all the "cool" opera singers... I was always a musical nerd.

NB: It was purely accidental. I was always involved in music. I started piano lessons when I was 6, played the flute in band, but I was always singing. We used to drive across Canada every summer (Vancouver to Manitoba) and I sang the whole way... Fiddler on the Roof, Neil Diamond, I knew all the lyrics! I decided I wanted to be a Jazz singer and was accepted into a music program after high-school. I had to take "classical" voice training... that was my first introduction to opera, and it became clear at the time, that this kind of singing came more natural to me, so the journey began.

SS: Well, my mom was always listening to Saturday Afternoon At the Opera on CBC when I was a kid, and she still does. So I had opera around me. But I started out playing piano at age 7. In high school I played in the school band and joined Musical Theatre, and did some small roles and fell in love with acting and singing. And I wanted to be like Harry Connick Jr. or Diana Krall and play piano and sing. So I started singing lessons and my teacher at the Victoria Conservatory of Music, Karen Smith, introduced me to Joanne Hounsell, and told me I should pursue classical training.  And voila! I was exposed to the beauty of art song and opera arias and fell in love with it.  I attended UBC for 4 years and studied with Mr. Peter Barcza there. I had the opportunity to perform several roles including Don Ottavio from Don Giovanni, and Rodolfo from La Boheme, as well as to experience solos in orchestral concerts with the Vancouver Symphony during my tenure at UBC.

AS: It decided on me actually.  I was really into musical theater and when I went to the Vancouver Academy of Music they really didn't want me to pursue it. So I stuck it out and figured I would just do the degree in opera and then go back to musicals.  But then I sort of fell in love with it and well, I'm still singing it.  But, I would give anything to do another musical again.  And also, big thing I forgot to mention... I don’t dance.

Who is your biggest musical influence?
AG: I’d have to say as a composer, Verdi.  But I could also say Bach, Handel, Palestrina and Tomas Luis de Victoria early on. Oh!  And believe it or not Gregorian chant!! I loved it when we had to sing it in school, at a monastery.

NB: I'm a big fan of Marilyn Horne, Dolora Zajick, and most recently Jennifer Larmore. Those are the ladies I love listening to. But my teachers and coaches have also had a big influence on me as a singer and as a human being.  I am grateful for the years I spent with Heidi Klassen, and most recently with Victoria Livengood. These exceptional singers have given me many gifts! Oh, and I can't leave out my favourite coach, Rogelio Riojas-Nolasco.  That man knows how to make me work!

SS: My biggest musical influence in Opera? Probably Placido Domingo.  His musicianship and his dramatic technique is incredible. For vocal production though, it's a tie between Fritz Wunderlich and Pavarotti. The ease they have to create such a beautiful tone, such pure, unadulterated beauty in their voices. Effortless and perfectly lined up. Flawless technique.

AS: That’s a tough one.  My father listened to ‘The Three Tenors’ all the time when i was growing up, especially Pavarotti. But I tended to listen to Joan Sutherland when I was first starting out, and then Maria Callas.  I still listen to Maria Callas and her interpretations before going to anyone else, as I love her dramatic intensity. Now I listen to all of the great Italians, Freni, Scotto, etc.

What is your favourite role that you have sung and why?

AG: Macbeth. First off it feels like vocally it was written for me, and secondly I can identify with the character so well. He is a man with flaws and demons. He may be physically strong, but can be weak in the face of these demons or outside influences.

NB: Not gonna lie, I would *almost* die to sing Carmen in a staged production. I think we have a lot in common, although I hope my life doesn't end so tragically!

SS: Rodolfo from La Bohème. Rodolfo is a character I feel I can most relate to. He's young, a poet, full of spirit and optimism. He falls madly in love with Mimi, and it's a love that is so real. She's his true love, which is why he's distraught at the end when she dies, because he feels responsible that he couldn't give her enough. He always just wanted the best for her.  I feel I have a lot of that in my persona. I can relate. Also, the music Puccini writes is just so perfect! And it feels right in my voice.  It's easy for me.

AS: To be honest, I don’t have a favourite.  They all had their ups and downs, and that’s really a tough one!

What is your dream role? 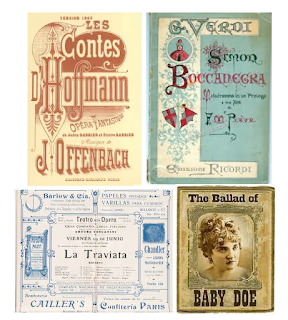 NB: I would love to one day perform an Azucena in Il Trovatore, Ulrica in Un ballo in maschera, or Augusta Tabor in The Ballad of Baby Doe. I'm drawn to these type of "crazy" ladies.

SS: That’s harder... so many! I'd have to say probably Hoffmann in Les contes d'Hoffmann is one of the biggest dream roles for me. I love his character and the stories he tells and the three different loves making up one. But also, a role that I have done too is Don Jose in Carmen -- that's also a dream role of sorts.  I just love the music Bizet has written in Carmen. And the passion and buildup of the character from start to end.

AS: Definitely Violetta from La Traviata.  I never dreamed I would be able to sing that role and now I'm studying it... I just can't wait to get the opportunity to sing the whole role on stage!

What role would you love to sing that isn't in your vocal category?

AG: Cavaradossi from Tosca.  Love those Puccini tenor arias!!!! Puccini was to the tenor what Verdi was to the baritone!

NB: Lucia from Lucia di Lammermoor... I dream of the mad-scene and 20 minute long cadenzas!

SS: Tosca in Tosca.  So dramatic in character, beautifully written music, and what an ending! I love Puccini! I think as an aria though, I'd love to sing the Queen of the Night's revenge aria from Die Zauberflöte.

AS: Easy!  Strauss’ Elektra! She's actually a dream role but *sighs* I just wasn't blessed with that kind of voice.  Of the men, I would say Figaro from Rossini’s Il barbiere di Siviglia.  That’s a great aria.

Thank you very much for visiting, and be sure to visit us tomorrow as our singers talk about the magic that is Verdi!

And be sure to pick up your tickets for the 'Tri-City Gala' . Advance tickets are available now at www.vancoco.ca.

~ VanCOCO… all about the Music!