A surprise was in store for those of us lucky people who made up the standing-room-only audience at Vancouver's Canadian Memorial Church on Saturday, January 8th for a concert performance of "Carmen". A modest unassuming new Vancouver operatic company, Vancouver Concert Opera Co-Operative, under the Managing and Artistic Director, contralto Natalie Burdeny, produced a "Carmen" that was riveting, passionate, poignant and totally satisfying.

Accompanied by piano collaborator, Dr. Kinza Tyrrell, from the vigor of the first notes to the sadness of the final scene, her participation anchored, but never overwhelmed the singers. She supported, focussed and fulfilled the role of a pit orchestra to the extent that the audience never seemed to realize that there was no pit orchestra!

The casting was superb. Not a single weakness, even considering that tenor John Arsenault (Don Jose) was ill and had his role taken on two day's notice by tenor, Frederik Robert. As this was a concert performance, scores were in view, so Robert's reliance on his score was easily accepted. But his performance was beyond the bounds of sight reading! Robert has a vibrant tenor, well-controlled, beautifully articulated, and sensitively acted. He had the audience in tears by the end of the last act. his last "Carmen, Je t'adore" breaking our hearts.

Natalie Burdeny's contralto was perfect for the part of Carmen. She showed an enviable understanding of the role, careful use of the many nuances of her vocal arsenal, to portray the vagaries of Carmen's personality. Her card scene was particularly memorable as she was able to counter-point the darkness of her fate against the frivolity of sopranos Frasquita (Kathleen Morrison) and Mercedes (Jeanine Fynn), both small parts but well done, controlled and balanced.

The part of Micaela was exquisitely sung by Arianna Sovernigo who possessed a delicate, pure soprano, every note centered and nurtured by consummate breath control.

As this was a concert production, most of the comprimario roles came from the chorus and melded seamlessly back into the chorus when their parts were finished.  Zuniga (bass-baritone, Max van Wyck), Morales (baritone, Ed Moran), El Remendado (tenor, Paul Just) and El Dancaire (tenor, Ed Moran) sang with gusto and panache, and added to the tightness and vitality of the opera.

The greatest excitement brought to an already exciting evening was contributed by baritone Andrew Greenwood, who made his entrance as Escamillo striding down the centre aisle of the church. Greenwood brought to his part the European experience of having sung this role in Prague. Given the freedom of a memorized part, this allowed him the opportunity to act, to relate and to play with his character which brought even more reality to the production, that had already mesmerized the rapt audience.

I have seen countless productions of "Carmen", beginning at the age of 12 when my father took me to the travelling San Carlo Opera production here in Vancouver, "Carmen" at the Opera Comique in Paris and a ghastly production in English in immediate post-war London, but I have never been so gripped by the work as I was last Saturday evening by this modest, talented and committed little group of dedicated singers! Kudos to the Vancouver Concert Opera Co-Operative (www.vancoco.ca). Kudos to Natalie Burdeny for her vision and her presentation. And kudos to a Vancouver audience who came out in droves and leapt to its feet with cheers at the conclusion. Vancouver can use more of music of this calibre! 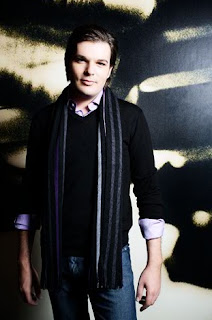 As they say in showbiz... "the show must go on!" and indeed it will. Due to illness the role of Don Jose will be performed tomorrow night by Tenor Frederik Robert.

No stranger to the operatic stage, Frederik has performed on numerous stages across Canada. We are very fortunate that he calls Vancouver his home and was available to fill the tall boots of John Arsenault.

To learn more about the multi-talented Frederik who started his career at the ripe old age of 8... please visit his website. In addition you can hear his beautiful rendition of Ben's Song which is also available for purchase online.

VanCOCO shouts out a big thank you to Frederik for stepping in and wishes him and the rest of the cast all the best for a great performance; one of many more to come I'm sure!
Posted by VanCOCO at 6:05 PM No comments:

VanCOCO has a Facebook presence! You can ensure you stay up to date on the ongoings of our company by joining our FAN PAGE.
Posted by VanCOCO at 4:58 PM No comments: