The following questions and answers were a result of a "Human Element" article written by Cheryl Andrichuk and published in Solovei Magazine; a publication celebrating Ukrainian and Eastern European Culture (Winter 2010).

Q: Why opera?  What was it that drew you to opera?   What keeps you there?

This is actually a tough question. The “draw” to opera was not clear cut for me. I have always had musical instincts, even as a young child, however I began my formal studies in Jazz. One of my early mentors suggested I train classically and I suppose that was he start of the journey to discover the art form we call opera. As with everything that we do as humans, learning leads to growth, and as I explored the genre and found expert guides along the way, it became clear to me that this was my path. Opera for me is the perfect combination of many elements. To me opera is very mathematical and scientific and at the same time, it requires a delicate overlay of human emotion as it is the emotion that reaches the audience after the technique is “in order”. This is not to say that we never stop “training”. There is always room for improvement, and as we become one with our voice, the possibility to explore other performance techniques to create a whole package or experience is ideally what we are aiming for. This is part of what fascinates me about the art form, and I suppose, “keeps me there”. Many would say Opera is dying a slow death with many houses closing in throughout the world compiled with the loss of many of the “great ones” (Pavarotti, Sutherland, Sills, Forrester, Verrett) in the past few years. I think the young rising singers of today, have a duty to ensure that the genre remains in the public consciousness as it is part of our history and hopefully will carry on far into the future.

Q: You've taken a year sabbatical to get Vancoco up and running, correct?

In the summer of 2008, I took a sabbatical from my “day job” to go to Germany and embark on an audition tour. Overall that experience was amazing and I learned so much about the industry and what I need to do as an artist to find my niche. I returned to Canada in the Fall of 2009, and went “back to work” for approximately 8 months. During that time I was on the road, travelling back and forth to Colorado on a weekly basis. I was really struggling with re-entering the Corporate world after full immersion into the Musical world and as I result I was tossing around ideas in my head as to what to do next. I knew that I couldn’t continue on the current path and that I would eventually need to return to Europe, but in the meantime, I needed to refocus and determine the best strategy.

The idea for VanCOCO was really driven by three factors:

First and foremost, I personally wanted the opportunity to work with competent, talented and gifted singers that would elevate my own level of performance.

Secondly, I wanted to create a vehicle for the singers in this city/province to get a chance to work with each other to create something really special and at the same time, something repeatable with the potential for monetary rewards. For this reason I chose to structure it with a co-operative type business model was so that everyone would feel some claim to the project and as such would feel a need to contribute to the process.

Thirdly, I wanted to create networking opportunities for those involved, and as such by hiring seasoned industry professionals on a guest basis to participate in the preparation and execution of our concerts could potentially lead to further casting/employment. This business is based on reputation and networking. It is a known fact that very few will land a job based solely on an audition. Most of the time, we are offered roles based on referral and to get those referrals you need to work with as many people as possible.

Q: Have you seen cooperative opera somewhere else?  What gave you the idea?

I have not seen co-operative opera before. I know this “model” exists in the theatre world but have not had any direct experience or involvement. With my business background, drafting a budget and a pitch was the easy part. The artists who have agreed to participate I think see the vision as unique and potentially rewarding.

Q: Which languages do you speak?  Is it important to speak other languages to sing them?

I speak English and German, however, as all singers trained in this genre, I have studied “diction” for all the other prominent languages (Italian, French, Czech, Russian). Some people are more adept to language and while I don’t think I am one of them, experience and learning the rules, makes the job easier and easier each time. Ultimately knowing what you are saying is very important, and anyone who is multi-lingual is at an advantage. But for those of us who are not, there are other tools to get the job done.

Q: Is there a family history of singing?

There seems to be a very strong “artistic” history on my father’s side although I do have one cousin on my mother’s side who definitely displayed musical talent. You will find todays Burdenys on the forefront of photography and fine arts. There are also many whom are amateur musicians. Historically, the family has been creative. If I understand the history correct, my Great Grandfather was a cantor in the Ukrainian Orthodox Church and I have an Aunt who was a music educator.

Q: What do you think is something that the average person would never even realize is a reality for a professional opera singer?

Relationships, or rather the challenge of relationships. I know personally of few operatic singers, who juggle a successful career with a solid and committed relationship. As with any career that takes someone away from home, there are always questions regarding infidelity. Life on the road can be a lonely one, you adopt a temporary family for weeks/months at a time. For those who require stability, the challenge lies in finding a partner who is understands the demands of the job and can maintain a relationship that will inevitably be challenged by distance.

Q: Anything strange or unusual ever happen to you vis a vis performing in an opera?

Singers can be pranksters. Everyone is always looking to play a prank or a joke on stage, particularly when a show has been running for a long time. It’s usually an inside job, meant to jostle a colleague, very rarely with ill intent. I’ve personally been privy to a prank that could have gone terribly wrong. Years later we are still talking about it. I suppose it keeps us alive! Ask me some day… I’ll tell the story! It involved the Escamillo in our current production.

Q: Why did you choose this particular opera as your first production?

I chose Carmen because it is my favourite opera and also because it is a role that I want to sing. The music is memorable and most people, even if they are not opera buffs will recognize a couple of the main melodies (i.e. Carmen’s Habanera and the Torreador song). Ultimately we want our audience to enjoy music that they may not often get to hear. Vancouver Opera staged Carmen last season, so it will be a few years before it cycles around again.

Q: Any particular mentors or inspirations?

I have had many mentors along the way. While I would say that my teacher and friend, Heidi Klassen, has been pivotal in my development, there have been many others who have guided me along the way. From everyone I meet in the business I am usually able to take away some tip, trick or insight that will inevitably be incorporated into my artistry as I continue to grow and develop. As far as whom I listen to, Marilyn Horne and Eva Podles are at the top of my iPod playlists.

Q: Is there any 'dream role" you'd like to play.

Hands down… Carmen! And close second and third are Erda from Wagner’s Das Rheingold and Ulrica from Verdi’s Ballo in Maschera.
Posted by VanCOCO at 11:41 PM No comments:

Live interview on Co-Op Radio - December 22nd at 11am

Felicia Klingenberg, Co-Host of "Opera For The Singers" on Vancouver's Co-Op Radio (CFRO 102.7FM) will be interviewing VanCOCO's Managing and Artistic Director, Natalie Burdeny during their live broadcast on Wednesday, December 22nd from 11am to 12pm. The interview will be between 15-20 minutes in duration and will be followed by various recordings of Bizet's Carmen. Hope you are able to tune-in!

To learn more about Co-Op Radio please visit their website.
Posted by VanCOCO at 4:19 PM No comments:

A plug from the big guns!

It's nice to know that the big guns are showing their support for VanCOCO if the recent blog entry from the Vancouver Opera Blog is any indication... Bizet's Carmen In Concert (VO Blog - Dec 16, 2010)

If you follow the Vancouver Opera Blog you will quickly recognize that they have developed a social media machine. In my opinion it is one to be admired and emulated, so much so that they recently received mention in a new book called Blogging To Drive Business, written by Eric Butow. Featured as a case study, along with organizations such as Intel, Adidas, Vancouver Canucks, Molson Coors Brewing Company and Urban Spoon, it would seem that business should stand up and take notice of their creative use of social media outlets.
Posted by VanCOCO at 8:15 AM No comments:

From the misty Hills of Lammermuir to sun-drenched Seville

If you are a Vancouverite, hopefully you were fortunate enough to catch Vancouver Opera's recent production of Lucia di Lammermoor. And if you did catch the show, you are likely still reveling in arguably one of Vancouver Opera's best productions in a long time for every night was met with a standing ovation and exuberant "bravi" that made those of us on the stage wonder if the curtain would ever come down!

For four of our Carmen cast members it was an honour to share the stage with Lucia's stellar talent including Eglise Gutierrez (Lucia), Michael Fabiano (Edgardo), Gregory Dahl (Enrico), and Burak Bilgili (Raimondo). 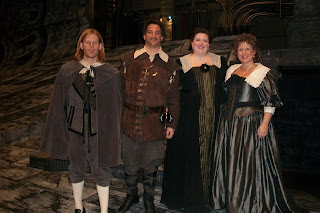 Now that the curtain has fallen on Lucia, it's time for VanCOCO's quotient to close the score on Donizetti and raise a glass of sangria to Carmen! Vivat, vivat le Toréro... see you in January!
Posted by VanCOCO at 10:23 PM No comments: