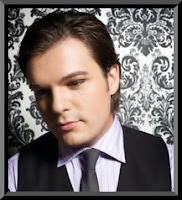 A TENOR WHO REQUIRES NO INTRODUCTION! For those of you who saw VanCOCO's debut performance of Carmen last January will remember the magic that occurred. Faced with ailing Don Jose, Frédérik stepped in with less than 48 hours notice and sang an utterly moving (and critically acclaimed) performance of Carmen. We at VanCOCO are so glad that he was able to step in on such short notice. Frédérik is thumbs up in our book and he should be in yours as well. We are so excited to have him back to join us for our upcoming February performances of Verdi's Rigoletto where he will be featured as Il Duca (Duke of Mantua). Imagine what he can do when he has had time to prepare! Quite simply, Frédérik is a force to be reckoned with!

Here's what he had to say when we asked him a few inside question.

(Q) We all have a guilty pleasure when it comes to our listening tastes, what do you enjoy listening to that we might find as a surprise?

(A) Guilty? Never! I love musicals and pop ballads from the 80's and 90's. I love my old school Mariah.  The cheesier the better.  As for musicals, the more obscure the better.  ie: if you've ever heard the music from Starlight Express, I'd be super impressed!

(Q) How did you get started with opera?

(A) I started singing opera by accident. In 1999, while I was in full training as a pop and musical theater singer, my voice teacher in Edmonton got notice of a new opera program starting in Edmonton called Opera Nuova. He wanted me to audition as he and I had dabbled in classical music previously. We chose two arias (Pourquoi me reveiller and Che gelida manina) and I went home and started to work on it. Basically I copied Pavarotti's voice, as best I could, and came back to my lesson with my best imitation. My teacher couldn't believe how natural it sounded and how the music suited me. Several months later I did my audition and got the lead in both operas that summer.

(Q)  What would someone who has never experienced opera before enjoy about Rigoletto?

(A) There are very few operas in existence today with so many incredible melodies as you'll find in Rigoletto. If a person is new to opera, they are sure to walk away with the feeling that Rigoletto was one of the BEST shows they've ever heard and seen. They'll be sure to leave the hall whistling one of the tunes from the opera.

Stay tuned for more from "Cast Corner" and don't forget to get your tickets for Rigoletto! February 15 and 17 in Vancouver and February 18 in White Rock where we will be making our debut! Advance tickets are ON SALE NOW and you benefit from savings by getting your tickets early!
Posted by Ed Moran at 8:49 AM